Every investor is aware of the disclaimer that “PAST PERFORMANCE IS NOT NECESSARILY INDICATIVE OF FUTURE PERFORMANCE.” It is mandated by regulators to be written on all materials that contain performance information. At its basic level what this means is that you (and the people with whom you’re investing) CANNOT predict the future. Evidence of this abounds. As people have learned, just because John Paulson produced billions in profits from 2007-2010, that didn’t mean he’d produce the same result – or even profit at all – in 2011 or 2012. A primary reason for this unpredictability is that many investment managers and traders follow a singular or concentrated investment process or thesis. When that process or thesis is correct they profit. When it’s not, they suffer losses. They are not truly diversified.

Some people go so far as to interpret this observed unpredictability to mean that it is futile to try to pick winning investments. This belief has manifested itself in the drive for people to simply buy an index. But that action itself is based on the belief that the index will continue to perform in the future in a fashion consistent with how it performed in the past. The reality is that every decision is based on a prediction. As Mike Dever shows in his best-selling book Jackass Investing: Don’t do it. Profit from it., no investment performs in the future simply because that’s how it has performed in the past. For example, in his opening chapter, which you can read here, he shows that there is no magical “intrinsic” return for owning stocks. Every potential investment is based on at least one sound, logical “Return Driver.” The key to understanding future performance is in understanding the validity of the underlying return drivers.

While understanding the return driver underlying a trading strategy will provide an indication of the validity of that trading strategy, it will not provide an indication of the predictability of future returns relative to past performance. That is because any one return driver, no matter how valid historically, can become invalid as a result of changing circumstances. For example, prior to the introduction of the Euro, many traders employed convergence strategies based on the fact that other European currencies were soon to be replaced by the Euro. That strategy obviously became invalidated when the Euro came into existence. This is an example of a “transient” trading strategy. Transient strategies abound. When the U.S. Federal Reserve commits to holding interest rates low, traders can profit from the strategy of borrowing short and buying long, taking advantage of a “locked-in” yield curve. When the Swiss National Bank pegs the Swiss franc to the Euro, traders can employ reversion strategies in the belief that any deviation from that level will result in the rate reverting back to 1.2 CHF to the EUR (although an argument can be made for a conflicting transient strategy, that of buying CHF in expectation that Swiss National Bank resolve will ultimately wane, and when they ‘give up’ the peg, the value of the franc will then rise sharply against the Euro).

There is a way, however, to improve the probability that future performance will approximate past performance. That is to employ numerous trading strategies that are both:

This is the approach used by Brandywine.

HYPOTHETICAL PERFORMANCE RESULTS HAVE MANY INHERENT LIMITATIONS, SOME OF WHICH ARE DESCRIBED BELOW. NO REPRESENTATION IS BEING MADE THAT ANY ACCOUNT WILL OR IS LIKELY TO ACHIEVE PROFITS OR LOSSES SIMILAR TO THOSE SHOWN. IN FACT, THERE ARE FREQUENTLY SHARP DIFFERENCES BETWEEN HYPOTHETICAL PERFORMANCE RESULTS AND THE ACTUAL RESULTS SUBSEQUENTLY ACHIEVED BY ANY PARTICULAR TRADING PROGRAM.

ONE OF THE LIMITATIONS OF HYPOTHETICAL PERFORMANCE RESULTS IS THAT THEY ARE GENERALLY PREPARED WITH THE BENEFIT OF HINDSIGHT. IN ADDITION, HYPOTHETICAL TRADING DOES NOT INVOLVE FINANCIAL RISK, AND NO HYPOTHETICAL TRADING RECORD CAN COMPLETELY ACCOUNT FOR THE IMPACT OF FINANCIAL RISK IN ACTUAL TRADING. FOR EXAMPLE, THE ABILITY TO WITHSTAND LOSSES OR TO ADHERE TO A PARTICULAR TRADING PROGRAM IN SPITE OF TRADING LOSSES ARE MATERIAL POINTS WHICH CAN ALSO ADVERSELY AFFECT ACTUAL TRADING RESULTS. THERE ARE NUMEROUS OTHER FACTORS RELATED TO THE MARKETS IN GENERAL OR TO THE IMPLEMENTATION OF ANY SPECIFIC TRADING PROGRAM WHICH CANNOT BE FULLY ACCOUNTED FOR IN THE PREPARATION OF HYPOTHETICAL PERFORMANCE RESULTS AND ALL OF WHICH CAN ADVERSELY AFFECT ACTUAL TRADING RESULTS. 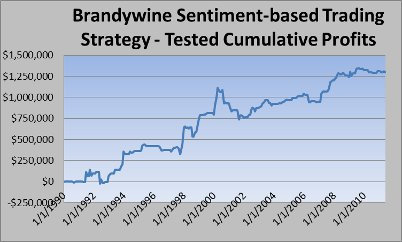 This strategy is based on a sound, logical return driver. When investor sentiment in individual global stock markets reaches extreme lows, usually as a result of a rapid sell-off, Brandywine looks to buy if prices fail to extend to new lows. The chart shows the back-tested performance of this strategy assuming a constant position size and no compounding of returns. Over the 21½ year period profits totaled $1.3 million (based on $500,000 allocated by Brandywine’s Symphony program to this strategy, which provides Brandywine with our targeted 12% annualized return). Over the test period the strategy proved to be a strong performer, with a nicely sloping uptrend in cumulative profits. Since the start of actual trading in Brandywine’s Symphony program in July 2011 (evidenced by the vertical line in the chart below, which is an extension of the prior chart), this performance has continued. 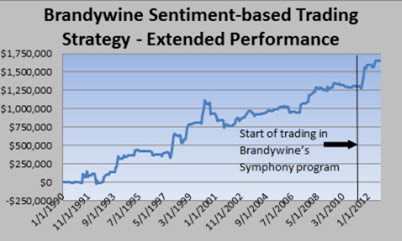 But as pleased as we are with the past performance (both tested and actual) of this strategy, and as confident as we are in its sustainability, we realize there have been, and will again be, hostile environments that will result in losses for this strategy. While we expect this strategy to profitably contribute to the long-term returns of Brandywine’s Symphony program, we are totally uncomfortable projecting its shorter-term performance. Also, as good as this past performance looks, if we were trading this strategy on a standalone basis, note that it would have suffered a $353,000 loss (on the $500,000 allocated to the strategy) from April 2000 through January 2002.

However, this drawdown only poses a problem if this strategy is viewed in isolation or used as the only strategy in a portfolio. Adding additional trading strategies, each based on a different sound, logical return driver, reduces the probability that the portfolio as a whole will face an adverse environment. For example, the chart below shows the tested past performance of one of Brandywine’s event-driven strategies. This strategy trades interest rates based on inflation factors and reports. As the chart illustrates, with inflation seemingly in check throughout the 2000s, this strategy was presented with very few trading/profit opportunities. But during the same period during which the previously-displayed strategy produced its $353,000 drawdown, this strategy produced a significant profit, gaining $340,000 from April 2000 through January 2002. 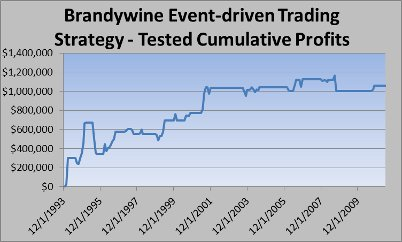 This is the simple premise on which Brandywine’s Symphony program is built. By combining dozens of independent trading strategies, which each produces profits and losses independent of the others, Brandywine’s Symphony program is able to earn the average return of each, while dramatically reducing drawdown and, here’s the most important benefit, increasing the probability that our future performance will match our past performance. This is because Brandywine is not dependent on any single market environment or condition to produce profits. Instead, our overall performance is the result of the combination of hundreds of strategy-market performances, each one of which is based on its own distinct return driver, independent of the others.

While the concept of true portfolio diversification is simple, its execution is not. Brandywines’ Symphony program is the culmination of more than 30 years of research and trading by Brandywine. We pioneered the use of fundamentally-based trading strategies in a 100% systematic portfolio. Perhaps most important, is the method Brandywine developed to allocate capital across its trading strategies and markets. Unlike most portfolio modeling formulas, which are designed to produce the best risk-adjusted results, Brandywine developed a portfolio allocation model with the primary goal of producing predictable performance. The effectiveness of this approach is evident in our results, where our actual performance continues to perform in line with both our past actual and tested performance.