This type of short selling ban by governments is nothing new.  Government regulators in many different countries have often reacted to adverse stock market conditions with similar directives.

This type of action is usually taken by regulators during times of severe market declines with high volatility.  Government regulators think that extreme volatility is a disruption to the orderly functioning of the market, so they often decide to “do something” in order to appease their constituents.

However, it is unrealistic to expect the stock market to only go up, so the prohibition of short-selling during market declines is fundamentally irrational.  Conventional investment wisdom assumes that asset classes are long-only investment vehicles, so it has become accepted that being long is “good” while being short is “bad”.  This is ridiculous.

As with most government actions, short-selling bans fail to produce the desired outcome, and oftentimes exacerbate the situation that regulators are attempting to “fix”.  Short-selling bans often have unintended consequences.  As I discuss in Myth #10 of Jackass Investing, short sellers provide the stock market with liquidity when they step in to sell short stocks that become over-hyped by emotional buyers.  In addition, short sellers must buy back stock in order to close their positions, so by instituting short-selling bans, governments essentially remove a source of liquidity during times when the markets need it the most.

Don’t just take my word for it.  Numerous academic studies have also shown the ineffectiveness and potential damage due to short selling bans and have confirmed the positive contribution of short sellers to market efficiency.  In fact, contrary to the intent of governments when instituting such bans, studies have shown that banning short selling reduces liquidity and increases volatility.

The belief that short selling destabilizes markets is a myth.

As a result of their ineffectiveness and misguided beliefs, I am awarding a Jackass Investing “Poor-Folio” Award to .  .  . the Spanish and Italian market regulators responsible for instituting short-selling bans.

Brandywine’s non-correlation is not a result of chance. It is by design. Based on Brandywine’s 30+ years of research and trading experience, Brandywine’s Symphony program incorporates dozens of fundamentally-based – yet systematically applied – trading strategies to trade across more than 100 global financial and commodity markets. Many of the trading strategies employed by Brandywine were developed more than two decades ago and their continued strong performance today proves they are based on logical “return drivers” that have withstood the test of time. (Visit brandywine.com to view a graphical illustration of Brandywine’s allocation across trading strategies and markets).

Diversification Examples
Perhaps the best way to explain the fundamental source of Brandywine’s non-correlation with “traditional” CTAs is to present some specific recent trade examples. In this section we’ll present three specific trades as examples that contributed to Brandywine’s differentiated performance.

The strategies that produced these trades, because they are based on “return drivers” that are distinct from trend following futures traders, also produced differentiated returns throughout the past year. These are three examples out of hundreds of potential examples of Brandywine’s unique trading model and performance. Exposing them is intended to provide you with a better understanding of Brandywine’s diversifying value when included in a portfolio of traditional CTAs.

Fundamentally-based Counter-Trend Strategy in Natural Gas
Although Brandywine is not a trend-follower, we do believe in the efficacy of trend-following. (Mike Dever discusses the value of trend following in chapter 7 of his bestselling book, Jackass Investing: Don’t do it. Profit from it. You can read a complimentary copy of that chapter here: http://bit.ly/wX2ONc). As a result, we have always been skeptical of buy-low, sell-high counter-trend strategies, UNLESS they are based on some sound fundamental principal (are not just a mathematical curve-fit). One fundamental concept that does make sense is using marginal cost-of-production concepts to trade low-priced commodities from the long side in a counter-trend fashion. A trading strategy based on this concept originated at Brandywine in the early 1990s and the strategy continues to perform positively today.

Earlier this year, due to rapid advances in natural gas extraction by energy companies as a result of the development of “fracking” and the exploration of “shale gas”, natural gas production in the United States reached new highs. As a result, natural gas prices reached multi-year lows. This triggered Brandywine’s fundamentally-based counter-trend strategy to begin buying natural gas as prices dropped well below $3 (MBtu). In a multi-strategy program such as Brandywine’s Symphony, this initially had the appearance of Brandywine “taking profits” on its short position. 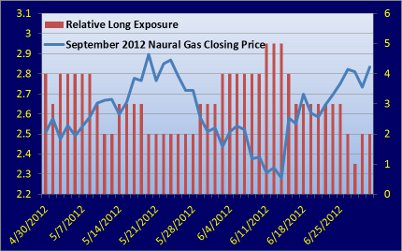 The end result was that during June this strategy produced a net gain of more than 30 basis points for Brandywine’s Symphony program, and it did so in a fashion that was completely uncorrelated to the returns of the other trading strategies employed by Brandywine. This strategy is also expected to be profitable on the majority (in excess of 70%) of its trades, while being selectively “in-the-market” less than 25% of the time. Historically, this strategy has a zero correlation to trend following CTAs.

Event Trading in the Dollar Index
Another unique category of strategies employed by Brandywine are event-based trading strategies. These were developed based on the discretionary trading experience of Brandywine’s founder in the 1980s. The return driver underlying these strategies is based on the fact that various events, such as the information contained in government reports, can trigger significant market moves or trend reversals in affected markets. Under certain conditions that short-term market reaction is predictive of future market direction. Brandywine’s event-based strategies are designed to capture those moves. One such trade, a short position in the U.S. dollar, was triggered following the release of the Employment Report on June 1st. Based on this event and subsequent market factors, Brandywine entered into a short position in the U.S dollar index. As this was an event-based trade, and not dependent on trends, this short position was entered into within days of the market top set on the morning of June 1st. Brandywine remained in this trade at the end of June. As a result of being in this trade, the collapse in the dollar on June 29th provided differentiated profits (compared with the major CTA indexes) for Brandywine’s investors. 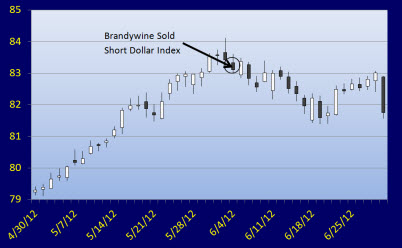