In the first 38 months of trading in Brandywine’s Symphony Program, investors earned a cumulative 27% (and investors in our aggressively-traded Brandywine Symphony Preferred Fund gained an explosive 127%). The Sharpe ratio on both programs exceeded 1.0. What made this performance stand out even more was the fact that most other futures traders posted losses throughout this period. In contrast, the past 11 months have been the most difficult on record for Brandywine Symphony, which has posted a drawdown of 16%, while other futures managers have thrived.

In this report we’ll take a look at the two periods with the intent of understanding the differences between the strong performance of the first 38 months and the more recent drawdown.

The 38 Month Rally
An evaluation of Brandywine’s performance during the positive first 38 months of trading reveals that profit contributions came from a wide range of investment strategies and markets. Moreover, these contributors varied over time. No single market, sector or investment strategy dominated over the entire period. However, the profits were not the result of one continuous move higher in performance. As you might expect, there was an ebb and flow of performance over that period. These can be shown as three distinct positive periods interspersed by two drawdown periods (prior to our most recent drawdown). The positive periods were simply the result of a majority of our investment strategies being in sync with the markets and producing profits, while the opposite was true of the drawdown periods. 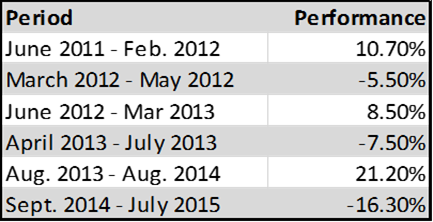 The 11 Month Drawdown
The current drawdown, which began 11 months ago, can best be summarized by first categorizing our trading strategies into four groups:

The Value group encompasses a number of different strategies, each based on a distinct Return Driver. But they share the common belief that markets will revert to their true value over the longer-term. We realize that good value can turn into great value if markets trend lower. Indeed, a key characteristic of these strategies is that they often accumulate losses before their value is realized (but often, the greater the shorter-term downside, the greater the ultimate upside). Because of our understanding that these strategies can be overwhelmed and generate losses in the shorter-term, we include a separate group of strategies in the portfolio that are designed to thrive in such conditions. These are Brandywine’s “Alpha Hedge” strategies.

Throughout the strong performance over the first 38 months, the Fundamental and Sentiment strategies tended to be Brandywine’s most consistent performers. Their performances not only complemented each other, but often the strategies categorized within these groups would profit when Value or Alpha Hedge were losing. This is the basis of Brandywine’s portfolio allocation model, which endeavors to maintain balance among the strategies and markets in the portfolio with the intent of smoothing out overall performance. This favorable characteristic was turned on its head over the last 11 months, as Brandywine’s Fundamental and Sentiment strategies contributed to the drawdown. Had the strategies simply performed as they had over the first 38 months (which was in line with expectations), there would have been no drawdown.

July’s Performance
Whereas the first 10 months of the current drawdown can be attributed to a slight profit in the Value-Alpha Hedge combination being offset by stark underperformance in Brandywine’s Fundamental and Sentiment strategies, July’s loss was fully caused by the selloff in commodities (crude was down more than 20% and all major commodity indexes fell in the double digits), which hurt the performance of the Value strategies. Unfortunately, Alpha Hedge did not serve as a hedge during the month, but actually added to the losses. The Fundamental and Sentiment strategies were essentially flat on the month. Although the final loss was in the range of what we would consider “extreme,” it was achieved by a gradual erosion of performance throughout the month, rather than by one or a few sizable down days. In fact, Brandywine’s value-at-risk (VaR) declined to its lowest levels in more than a year and our margin-to-equity ratio (another measure of market exposure), fell into the lowest decile of the past year. In other words, the portfolio allocation model did what it could do to contain losses, but pervasive losses across all strategy groups led to cumulative losses, without respite.

While we obviously cannot predict the future, past drawdowns have each been followed by strong recoveries—with the largest drawdowns being followed by the largest recoveries. And while we are disappointed in the performance of our strategies over the past year, we are confident they remain valid and are based on sound, logical Return Drivers. It is our belief that the first 38 months of Brandywine Symphony’s performance is more representative of what to expect going forward than is the past 11.