In last month’s report we wrote (playfully questioning) the “discovery” of momentum, value and liquidity as being valid Return Drivers affecting equity prices. Although these Return Drivers had not only been discovered decades before they subsequently became revealed by academics in the early 1990s, they had also been exploited for just as long by investors as varied as Warren Buffett, Richard Donchian and John Henry (among many, many others). In other words, these weren’t “discoveries” at all. We also pointed out that as soon as the mutual fund companies and other financial marketers discovered the appetite the public had for placing money in the new hot thing, they spun out numerous “Smart Beta” funds, which is the clever marketing title that’s been given to funds focusing on single strategies based on these Return Drivers.

In the mistaken belief that investors earn a return by assuming risks not desired to be held by others (as pointed out below, this is only one of many sources of return), these selectively discovered Return Drivers have been anointed as “risk factors.” They have earned a place alongside the “equity risk premium” and other academic constructs as being so well known that they have now became “beta” (or at least “smart beta”) and not the treasured “alpha” that creates excess returns.

There is No Alpha or Beta—Only Return Drivers
The field of behavioral finance is beginning to shed light on the fact that market returns are not simply a function of risk transfer but also caused by the inept behavior of people who are truly attempting to profit – but are incapable of making the correct decisions to do so. This is often not solely their fault. In our view many people are oblivious to the process required to invest correctly. They are seriously misled by the glut of misinformation published in the popular financial press and the reactionary behavior of gurus and other talking heads. In addition, they are poorly served by the academic constructs such as risk premium (which is merely a grandiose label given to a simple observation of past market behavior), and the massive attention placed on “diversifying” across “asset classes” (This will be the topic of a future report). As a result the vast majority of people will employ a gambling mentality that assures that over time they will transfer their money to more disciplined investors.

In contrast, it is only through a sound understanding of the valid Return Drivers that affect each market that a repeatable process for positive investment returns can be developed.

Brandywine’s Return Drivers
Over our 30+ year history of research and trading, Brandywine has developed and time-tested (with real money) a sizable number of Return Drivers. Many of these remain valid and are employed today. Although we have disclosed some of these Return Drivers (2), it would be adverse to our investment edge to reveal them all. In the parlance of the investment industry, to do so, over time, would convert the “alpha” generated by those strategies today into “smart beta” and ultimately just “beta,” at some point in the future.

To do that would violate the trust we have with our investors to protect their best interests. But without revealing the specific trading strategies, we can disclose some actual trades generated by them.

Lean Hogs
One strategy that provides a great illustration of the types of differentiating trades entered into by Brandywine’s Symphony Program is one based on U.S. livestock market fundamentals. It initiated a trade in the lean hog market near the lows reached in August 2013 and held that position until the market peak in April 2014. Brandywine, despite employing a fully systematic trading model, often enters into trades such as this that appear to be more “discretionary” than “systematic.” 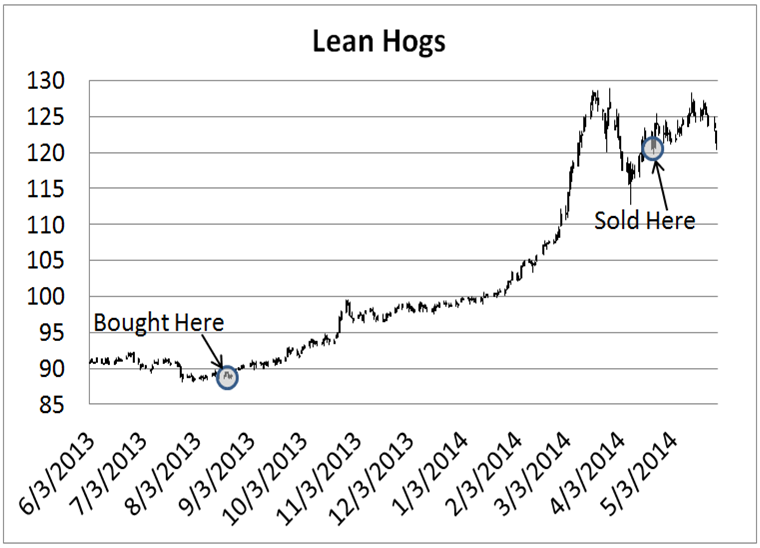 S&P 500
In Myth #3 of Mr. Dever’s book he presents examples of how people mis-time their trades by doing the opposite of what they should do (this is not a secret, Daniel Kahneman and Amos Tversky began research into such behavior in the 1970s). Brandywine incorporates a number of sentiment-based trading strategies to exploit this behavior across a wide range of markets. The trade below was based on one variation of a strategy disclosed by Mr. Dever in his book. 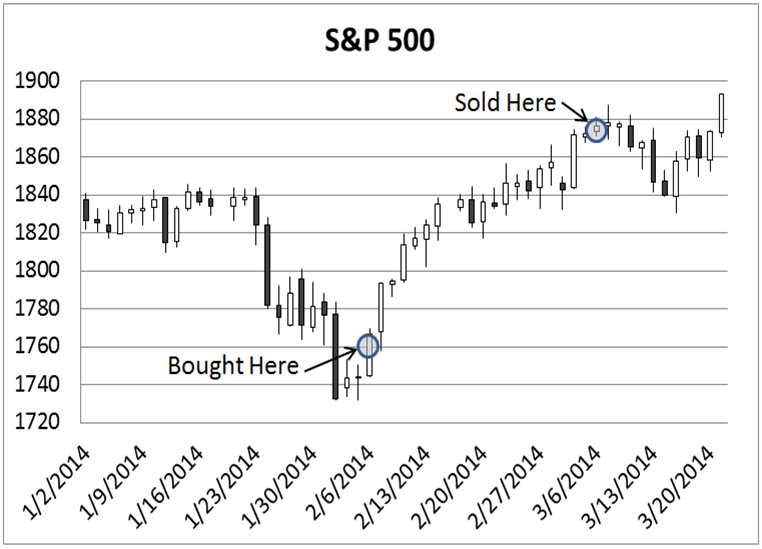 Balanced Diversification vs. Concentration. Discretionary vs. Systematic.
One key take-away from these trades, which is just a small sample of the many trades entered into by Brandywine in any given month, is that Brandywine is agnostic to the source of our returns. We don’t care whether they come from long positions in stock indexes or lean hogs, short positions in the Australian dollar, or a spread position in soybeans. As long as they are based on a sound, logical Return Driver, Brandywine will exploit these opportunities. Because of this, Brandywine’s trades often appear to be “discretionary” (based on an individual processing the data and deciding on a trade). In fact, however, while Brandywine employs significant discretion in the creation and development of its trading strategies, the application of those strategies in our actual trading is completely systematic.

The reason Brandywine employs a diversity of seemingly discretionary trading strategies in a fully systematic trading program is due to the result of extensive research Brandywine conducted beginning in the late 1980s. That research made clear that the most consistent and predictable returns are earned by systematically employing broad strategy and market diversification across a balanced portfolio of fundamental, Return Driver-based trading strategies. The key is to maintain balance across those Return Drivers and markets so that, over time, no single Return Driver or market will dominate performance.

As always, please reach out to us with any questions you may have.

(1) Exploiting the Myths: Profiting from Wall Street’s misguided beliefs (which became a Kindle best-seller under the popular title Jackass Investing: Don’t do it. Profit from it.); in the “takeaways” for Myth #1 on page 17.

(2) One strategy revealed in its entirety was designed to exploit people’s tendency to do the opposite of what they should do, as described in Myth #3 of Mr. Dever’s book. That strategy has contributed positively to Brandywine’s performance since it was introduced into the portfolio following its release to the public. A trade example in the S&P 500 from a variant of this strategy is displayed on the prior page.