One Contributor to Brandywine’s Strong Finish in July
Brandywine’s Symphony program kept pace with the strong performance of the BTOP 50 managed futures index throughout the first three weeks of July. But the big differentiator was the final week, when Brandywine gained while the index fell. One reason for this non-correlation is Brandywine’s use of sentiment- and fundamentally-based trading strategies to trade in stock indexes and directional arbitrage strategies in currencies. The result was that during the middle of the week of July 23rd, Brandywine’s Symphony program shifted from a net short to a net long position in the global stock index markets, enabling Brandywine to profit from the strong month-end rally in equities (this occurred following the statement by European Central Bank President Mario Draghi that the central bank would do whatever was necessary to preserve the euro). While Brandywine had no advance notice that Mr. Draghi would be making that statement, some of our trading strategies recognized that the environment was ripe for a catalyst to trigger short-covering and a market rally. In contrast to Brandywine, trend-following CTAs remained short stock indexes (and net long the dollar), which contributed to their month-end losses. 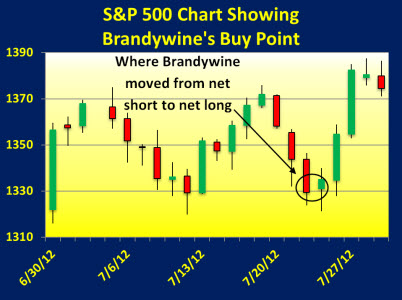 There is a reason all CTAs are mandated to state that PAST PERFORMANCE IS NOT INDICATIVE OF FUTURE PERFORMANCE. No performance is 100% predictable. There is no better example than that of the U.S. stock market. From August 1982 through March 2000 the S&P 500 Total Return index averaged 19.47% annual returns and suffered just one losing year. But for the subsequent 12+ year period, ending in July 2012, it averaged returns of just +1.25% and suffered two major drawdowns, one that exceeded 50%. The first 18 year period provided no predictability regarding the performance of the second period. There is no mystery why this is so. The reason is quite clear. The performance of U.S. stocks is dominated by one return driver. As Mike Dever shows in his best-seller, for periods of less than 20 years, stock prices are driven primarily by people’s enthusiasm for owning (or not owning) stocks. When people are enthusiastic, prices go up. When they are not, prices stagnate or fall. An “investment” in the U.S. stock market provides no true portfolio diversification. You can read a complimentary copy of that study as it was published in Mr. Dever’s book here: http://bit.ly/xrz2Ur.

But there is a solution that increases the probability that future performance will approximate past performance (although, as we state above PAST PERFORMANCE IS NOT INDICATIVE OF FUTURE PERFORMANCE). That is to create a portfolio that is “truly” diversified across multiple return drivers. Original research conducted by Brandywine in the 1980s led to the Brandywine Benchmark trading program, which traded a diversified portfolio across more than 100 markets and dozens of trading strategies based on disparate return drivers. In further confirmation of the efficacy of those trading strategies, we observed similar performance in the walk-forward testing when we updated the performance of those trading strategies during the 2000s. And now after 13 months of trading in Brandywine’s Symphony program, we’re seeing the continuation of that performance. You can see the past performance of Brandywine’s Symphony, the Brandywine Benchmark trading program and walk-forward testing at brandywine.com.

Earlier this year, due to rapid advances in natural gas extraction by energy companies as a result of the development of “fracking” and the exploration of “shale gas”, natural gas production in the United States reached new highs. As a result, natural gas prices reached multi-year lows. This triggered Brandywine’s fundamentally-based counter-trend strategy to begin buying natural gas as prices dropped well below $3 (MBtu). In a multi-strategy program such as Brandywine’s Symphony, this initially had the appearance of Brandywine “taking profits” on its short position.

The reason for this? The performance of Brandywine’s Symphony program is based on the performance of dozens of independent return drivers. Not just one (such as trend following). Some of these return drivers attempt to capture short-term counter-trend moves based on market sentiment or fundamental pricing relationships in a market or among multiple markets. Others are based on market reactions to events, such as government reports; while still others look at commodity market action in relation to repeatable seasonal activity, such as planting and harvesting periods. As a consequence, no single return driver or individual market dominates the performance of Brandywine’s Symphony program. This results in: