When I wrote Jackass Investing: Don’t do it. Profit from it., I did expect to get some virulent opposition to its content from those who have long preached conventional investment wisdom. After all, in the 20 investment myths exposed throughout the book, I show why they are wrong, and back up my case with more than 100 studies. But I didn’t expect to get it from Google.

After six months of word-of-mouth promotion, during which time Jackass Investing became the #1 best-selling mutual fund book on the Amazon Kindle (ahead of Common Sense on Mutual Funds, co-written by the capo of conventional investment wisdom, Vanguard founder John Bogle), I decided to test the waters of paid advertising. Google ad words provided an obvious test market opportunity. On February 12th I posted my first Google ad for the book.

At 11:02pm EST on February 16th I received an email from Google saying that “We noticed that one of your URLs was recently flagged as against policy” and that they would no longer run the ads. I was already in bed at the time (it was an early night) and saw neither this email nor the two that followed until 6am the following morning.

This first email was followed by a second one hour later that said “We have re-reviewed your site and determined that AdWords Site Policy issues no longer prevent ads from running for the site.”

OK. So whatever evil I committed in my sleep was apparently re-evaluated and confirmed to be “non-evil” by Google (who’s informal corporate slogan is “Don’t be evil.”) … that is until 4:19am the same night, when I received a third email arrived with this dire statement:

“It has come to our attention that your Google AdWords account does not comply with our Terms of Service and Advertising Policies. As a result, your account and any related accounts have been suspended, and your ads will no longer run on Google. Please be aware that you are prohibited from possessing or creating any other AdWords accounts, both now and in the future” and this statement appeared in red on my Google page:

“Your Google AdWords account has been permanently suspended for repeated violation of AdWords or Landing Page and Site policies in this or a related account.”

I’m not sure what happened to change things between midnight and 4am, as even now, 10 days later, I’ve gotten no answer. So now my book Jackass Investing, and I, Mike Dever, have been banned and deemed inappropriate by Google; the same company that, by the way, for years severely censored its search results in compliance with Chinese authorities, and for years knowingly took hundreds of millions of dollars in advertisements from illicit Canadian pharmacies (which Google admitted to while paying a $500 million fine). But they won’t accept $40 per day from me to advertise www.JackassInvesting.com.

This certainly won’t bust my book’s marketing efforts – after all, word-of-mouth will beat paid advertising any day – but it does make for an interesting story. Someone should write a book about it . . .

If you’ve got any ideas of your own, let me know.

UPDATE Feb 29, 2012: Looks like I’m back up-and-running with Google (did I have them on my update list to get these blog posts?). After a 12-day suspension, Jackass Investing ads are running again on Google. You can all stop calling me “Dr. Evil” now. Here’s the email I got from Google: 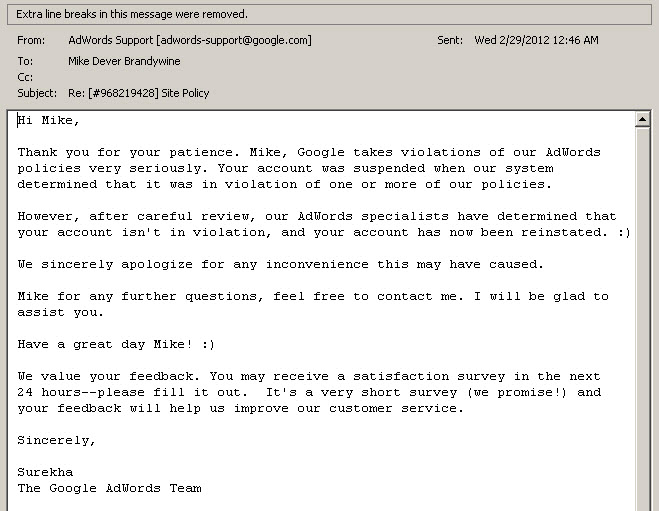